How the Peruvians got to grips with the collective labour agreements

In November 2020, twenty young Peruvians became certified “trainers in negotiation skills according to the AWVN/Harvard method”. These young people will train delegations of companies and trade unions in negotiating the collective labour agreement with a focus on win-win situations – ganar-ganar in Spanish. In doing so, they give substance to the social dialogue that the Peruvian employers and workers have set up with the help of Mondiaal FNV and DECP.

In January 2020, Covid-19 seemed to be one of those viral diseases in distant China that would never gain a foothold in the West. But the virus did arrive and in mid-March government after government came up with measures to prevent the spread of the virus as much as possible. We had to wash our hands, keep our distance and traveling was no longer possible – certainly not to Peru, as the South American countries closed their borders.

DECP consultants Dirk Joosse and Martien Robertz had recently been in Lima (Peru) to train a group of twenty young Peruvians from the CGTP trade union and the SNI entrepreneurial organisation to become negotiation trainers. It was the second training in a series of three organised by DECP and Mondiaal FNV. In between visits from the Netherlands, Samuel Machacuay and Carla Gómez would keep the mutual contacts warm and organize an activity here and there to ensure that the group would stay together.

The whole program was called “Ganar-ganar”, which is Spanish for win-win. Dirk had taken care of the first training in August 2019, so for Martien it was the first time that he had met the group. And he was impressed: “Such a high level! And so much interest in the matter, I've never seen that before.”

Many years of experience

DECP has been providing negotiation skills training for years, based on the AWVN/Harvard method. The core of the method is that both parties start from looking for a win-win situation. To achieve this, the negotiators must apply a number of principles. For example, they must have a good eye for the interests of their opponent. They must differentiate between conflict about content and the personal relationship. And they should try to make the negotiated package – the pie – as big as possible so that package deals are possible. In addition, a party gives away something at one point to bring in something extra at another.

The ganar-ganar approach works very well in the negotiations within the Asociación para el Trabajo, which was set up by Peruvian employers and workers to promote social dialogue. But ganar-ganar also works very well in collective bargaining within sectors and companies, according to the experiences of DECP in Vietnam, Indonesia and Malawi. This makes the program an essential part of the broader effort to promote bipartite social dialogue in Peru.

In May, Dirk and Martien would travel to Peru for a third and last time for the last training, which was mainly focused on the attitude of the trainers. After that, the group of Peruvian trainers could start offering its services to negotiating delegations from companies and trade unions. The group is part of the Asociación para el Trabajo, which was founded in June 2018 by the trade union CGTP and the employers' organisation SNI as a counterpart of the Dutch Labour Foundation – again with the support of Mondiaal FNV and DECP. The idea behind the trainers’ group is that it can contribute to the dissemination of the ideas of the social dialogue and can provide extra income. Part of what the trainers earn flows to the Asociación para el Trabajo.

But here too, the coronavirus got in the way. Travel restrictions made it impossible to travel to Peru. In the meantime, everyone was considering the new situation. What is going on? What else can we do? The contact between DECP and Mondiaal FNV and the group of trainers in distant Peru watered down somewhat. It was not until June that the restrictive measures were relaxed and everyone was now used to meeting via Zoom and Teams. Via Zoom, the Netherlands contacted the trainers’ group in Peru, and spoke with Samuel Machacuay. Is there still something to be saved?

Samuel spoke before the question could be asked. After only five minutes, Astrid (Mondiaal FNV red), Dirk, Martien and Peter's mouths fell open in surprise. What had happened? The group had not only stayed together but had adapted to the new situation at a rapid pace and had taken every opportunity to further educate and professionalise itself.

A physical meeting was no longer possible due to the strict lockdown, but in no time a virtual classroom was set up to maintain mutual contact. “Digital” also appeared to offer new possibilities. Because the collective labour agreement negotiations in Peru also took place via Zoom, the trainers-to-be could easily join in and experience a live collective agreement negotiation.

It became clear that digital collective bargaining is a challenge, even for experienced negotiators. This is because you miss a lot, such as facial expressions, bilateral informal contacts, etc. The trainer group decided to add a module of six sessions to the program about digital communication. This concerns, for example, recognising facial expressions and emotions in the voice.

In the meantime, five companies had registered for a trial run, so that the candidate trainers could practice in real life. A marketing company has been asked to put the service on the market in 2021 and consideration has been given to which services can be offered.

The Peruvians also further developed the method. There are roughly four styles of negotiation, depending mainly on the personality of the negotiator. Through a test it is easy to find out which style is dominant in someone. But isn't it also useful to ensure that different styles are always represented in a negotiating team?

Certificates for the participants in November

Dirk and Martien were deeply impressed by all the activities the group has developed. On 22 November there was one more webinar where the candidate trainers could ask questions and discuss the desired attitude in particular. Afterwards, the young people received a digital certificate from country managers Astrid Kaag of Mondiaal FNV and Peter Boorsma of DECP. Luis Villamil and José Naranjo – the president and treasurer of the Asociación para el Trabajo – closed the webinar. Both underlined the importance of this development project at a time when social dialogue in Peru is more needed than ever.

After the webinar ended, the Dutch participants discussed the event and the tremendous commitment and ambition of the Peruvians. The conclusion was unanimous: they are doing very very well. 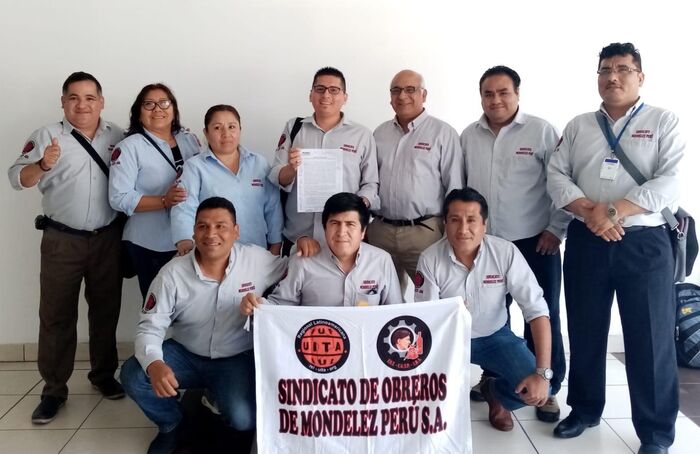 In the Mondelez-company they do it themselves

Before the Ganar-ganar program started, the DECP trainers Dirk Joosse and Martien Robertz had been to Peru before. Once they went to introduce the people of the employers' organization SNI to the ideas of the AWVN/Harvard methodology. And they went another time for a training for the employers’ and employees’ delegation of the horticultural company Camposol, prior to the actual collective labour agreement negotiations. This training was an enormous success.

In August 2019 Dirk also used his presence in Lima for the first Ganar-ganar training to introduce some twenty union officials to the ideas behind the AWVN/Harvard-method. Afterwards, of course, pictures had to be taken. A group of six men and women came to Dirk, each holding a photocopy of his book ‘El arte de la negociación’. “We are the negotiating delegation of the CGTP union at the multinational Mondelez,” they said. “We have studied your book thoroughly and are very enthusiastic about it. So we made another copy and gave it to the HR director of Mondelez and said: this is how we will enter the negotiations next month, we hope the management will too.”

Three months later, a message came from Peru with pictures of very satisfied union members at Mondelez. A collective labour agreement was concluded in no time, much to the satisfaction of both Mondelez and its employees.